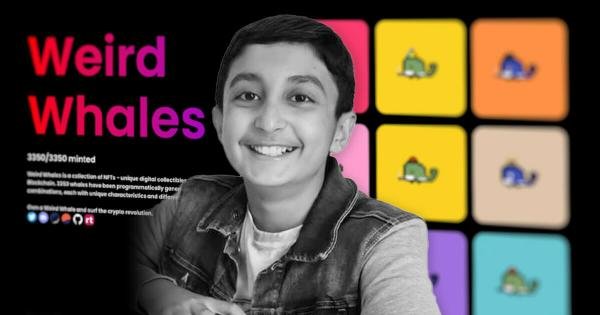 The non-fungible tokens (NFT) space has been attracting a large part of the global developers’ community and even 12-year-old kids are joining the rush. Once such 12-year-old Benyamin Ahmed coder recently joined the developers’ team of Boring Banas Co. to create an NFT collection dubbed Non-fungible Heroes (NFH).

This entire collection featuring 8,888 comic book-esque characters sold out in just 12 minutes for a record $5 million, as per the data on Dune Analytics. The NFT collection for NFH features heroes, villains, and gods, with their own storylines.

“It was a crazy adrenaline rush. You really never know how popular your product is until you let the public at it,” Ahmed told CNBC.

Artists from Disney, Marvel and Nickelodeon created these characters, and they are now also part of the Non-fungible Heroes Team (NFH). Ahmed’s partnership with Boring Banas comes after tasting early success with NFTs through his two NFT projects that earned him $400,000 in just two months. One of the projects was the Weird Whales. Ahmed said:

“The Weird Whales community has taught me a lot about what works and doesn’t work, and so I brought the experiences I had there with me.”

For his contribution to the Non-Fungible Heroes (NFH) NFT Collection, Ahmed received a percentage of the sale but didn’t disclose the amount. Ahmed worked as a developer on the team with his role focused on technical support.

Besides, he also contributed to creating the project’s web applications and smart contracts through the guidance of his father, who’s also a web developer. Ahmed said that this wasn’t a “quick cash grab” for him. He added:

The overall goal of the NFH project is to become “the first NFT project to make it to a theater near you”. The NFH team said that it will use most part of its revenue to fund this vision and grow the business.

Ahmed believes that the strength of the entire NFT space lies in the power of building communities. “Crypto is quite often seen as an exclusive club for coders and traders. However, this creative and highly educational aspect of communities is being completely overlooked,” he added.

The post This NFT Collection By This 12-Year Old Generates $5 Million In Record Time appeared first on Coingape.