Everyone Is Early To Bitcoin 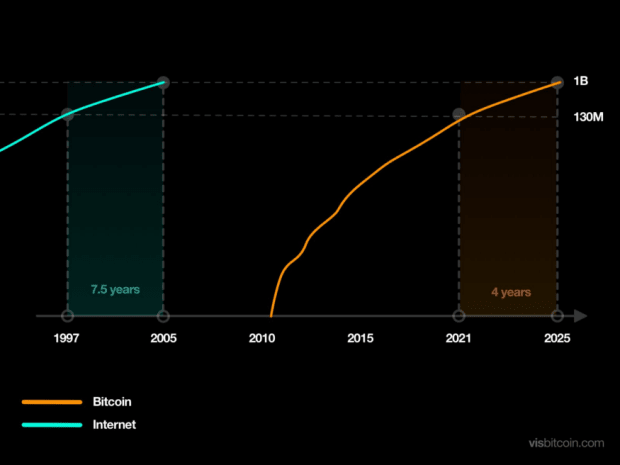 Scaling solutions promise to bring exponential growth to Bitcoin, ensuring that current volatility is a mere blip in the future.

I know of people that see the price of bitcoin and think to themselves, “Damn, I missed it. I’m late.” Because of this, they are drawn to the lower priced coins, the altcoins, that will ultimately have no value in the long run. They think the coins that are trading for less than a dollar are somehow going to become the “next bitcoin.” The issue here is that there is no “next bitcoin.” Bitcoin was, and is, a historic accident, kind of like the discovery of fire by our ancestors. For context, let’s discuss the early internet.

In the early 1990s, only a small number of people had access to things like email and forums. Back then, the internet was an oddity. Not a lot of people had a clue of where it was going. Few could have imagined social networking, social media, the iPhone, online conferencing and the shift to online business, and especially Amazon, which would be founded in 1994 as a bookstore. I think that’s where we are with Bitcoin. We are still very, very early. Particularly because so many people are not aware of all the developments that are occurring and what’s being built on top of Bitcoin as we speak.

One project being built on top of the Bitcoin blockchain is what’s called a Layer 2 solution — the Lightning Network, which now boasts over 14,000 nodes, and 68,300 payment channels spanning across all six continents (sorry, Antarctica). And then comes Layer 3 solutions, the decentralized apps that are being built on top of the Lightning Network. The goal is to create a new peer-to-peer internet. One that’s not subject to the control and censorship of Big Tech. In this way, it realizes the original ethos of the internet.

Using the infrastructure that’s being built by companies such as Impervious, we are seeing the first glimpse of projects that will enable people to make calls to Lightning nodes and monetize any service without a bank account using Lightning.

We are witnessing the early stages of an evolution. We don’t know where it’s going yet. Bitcoin’s Layer 1, the settlement layer, has proven to be the best store of value with nation states adopting it as legal tender and abandoning the U.S. dollar’s global hegemony. The Lightning Network has proven itself to be the best medium of exchange. And now we have the emergence of Layer 3, decentralized apps. The companies of the future will be built here. This makes bitcoin seem all the more scarce for the functionality it provides.

In terms of adoption, Bitcoin has roughly the same amount of users as the internet did back in 1997. However, Bitcoin is growing at a faster rate. If this continues, we may very well have over one billion users within the next four years.

The day-to-day price movement of a single bitcoin is merely noise. It doesn’t matter what price you buy at. You don’t have to take my word for it. There are individuals and groups deviations smarter and wealthier than me that see current prices as a blip. Using PlanB’s “Stock-to-Flow” model, we are steadily on our way to $1,000,000 per coin. Worrying about where we are trading right now is like worrying about Amazon or Apple’s share price in the late 2000s. We’re just getting started. The Lightning Network is still going strong.

These are very exciting times. I’m privileged to have lived and to have seen the dawn of the modern internet and its evolution to the present day. With Bitcoin, it’s not too late, we still have the opportunity to take part in its evolution.

This is a guest post by Paul Opoku. Opinions expressed are entirely their own and do not necessarily reflect those of BTC, Inc. or Bitcoin Magazine.