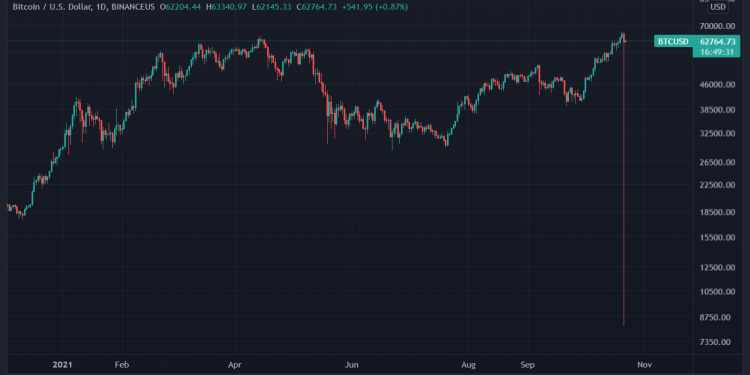 A bug on the Binance.US exchange saw the price of bitcoin flash crash to approximately $8,200. The issue appears to be resolved but highlights the issues that can sometimes occur on cryptocurrency exchanges.

The price of bitcoin crashed by 87% on Binance.US, the U.S. arm of the exchange, due to an algorithm bug, Binance confirmed. The incident lasted only a short while, and it was limited to the particular exchange. The asset dropped to $8,200 levels from its near all-time high price of $65,000.

It’s unclear as to why, specifically, the bug occurred, though it appears as if the situation has sorted itself out. In a statement emailed to Bloomberg, Binance.US said that the bug was pointed out by an institutional trader,

“One of our institutional traders indicated to us that they had a bug in their trading algorithm, which appears to have caused the sell-off. We are continuing to look into the event, but understand from the trader that they have now fixed their bug and that the issue appears to have been resolved.”

This is not the first time that such an incident has occurred in the crypto market. Far back in 2017, the price of Ethereum dropped to 10 cents from $319 on Coinbase Pro because of a multimillion-dollar market sell-off. These incidents also happen in traditional finance.

Some investors came out of the Binance.US flash crash for the better. One Reddit user posted about how he made approximately $52,000 during the crash because he placed an order for bitcoin at $11,000 two months ago. The limit order resulted in profit that was turned in a matter of seconds.

Cryptocurrency exchanges will have to tackle such issues

Binance.US will want to be careful about its reputation in the U.S., as it reportedly plans for an IPO within the next three years. The exchange is experiencing some trouble with regulators, as the CFTC is investigating potential insider trading, but it is also working hard to ensure compliance.

Centralized cryptocurrency exchanges have come a long way in the past few years. Several flash crashes, shutdowns, and malfunctions have been noted over this time, but they have built up their infrastructure. These incidents are more infrequent at the moment but do occur every now and then.

However, with the ever-increasing adoption of cryptocurrencies, centralized exchanges, in particular, will have to focus on being rock-solid in their operations. As more users enter the market, the potential for harm increases, and any hit to reputation could result in an advantage for the many competitors that exist.

The post Algorithm Bug Crashes Bitcoin to $8,200 on Binance.US appeared first on BeInCrypto.