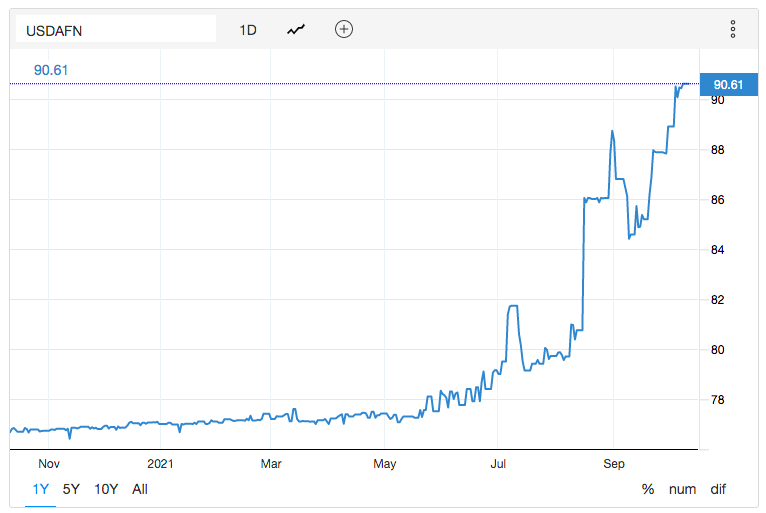 The adoption of cryptocurrencies is growing rapidly around the world, especially in developing countries.

Last month, El Salvador became the world’s first nation to adopt Bitcoin as legal tender alongside the US dollar. Following this, many other countries in the LATAM region, like Panama, also started working on adapting cryptocurrency.

As we reported, BitMEX CEO Alex Hoeptner predicts at least five countries accepting the cryptocurrency as legal tender by the end of next year, emphasizing that all of them will be developing countries that are “faced with an inherently unequal financial system” and because they have the “most to lose by continuing the status quo.”

This can already be seen happening in Afghanistan, where banks are severely limiting withdrawals while millions of Afghans currently face food insecurity and severe economic stress set off by cash shortages, rising food costs, and lost income.

“(Bitcoin) was easy to use, cheaper, and more secure than other options,” said Roya Mahboob, founder of the non-profit Digital Citizen Fund.

About a third of almost 16,000 females who learned basic computing skills at her center also learned how to set up a crypto wallet and receive funds. Some of them have left the country after Kabul was captured by the Taliban on Aug. 15, using their crypto wallets to move their money out.

Much like El Salvador, where roughly 70% of them do not have a bank account, the majority of Afghanistan’s population do not have bank accounts either, further accelerating crypto adoption.

According to El Salvador President Nayib Bukele, today, the government’s bitcoin wallet Chivo already has 3,000,000 active users, meaning 46% of the country’s population is using it.

The fiat currency of Afghanistan has also nosedived, and at the same time, Afghan banks and global financial institutions, including MoneyGram, Western Union, and the Central Bank of Afghanistan, lacks enough paper currency to cover withdrawals.

Back in August, following the takeover by the Taliban, the New York Federal Reserve cut off the country’s Central Bank’s access to its USD assets along with the capacity to settle USD transactions with other banks. Da Afghanistan Bank further lost its ability to purchase paper dollars from the Fed for liquidity and currency stability.

Additionally, the World Bank has stopped the bank from accessing its assets held by the International Monetary Fund (IMF). Mahboob told Reuters,

“I am thinking now – why didn’t we teach about crypto more aggressively, so more Afghans could have crypto wallets and be able to access their money now.”

While regulators around the world point to crypto’s usage in illegal activities despite Chainalysis’ report that the criminal share of all crypto activity fell to a mere 0.34% in 2020, Mahboob, who was named among Time magazine’s 100 most influential people in 2013. said:

“The traffickers and kidnappers will always find a way to abuse a system. But the power of crypto is bigger – especially for women and those who don’t have bank accounts, it is very beneficial and so empowering.”