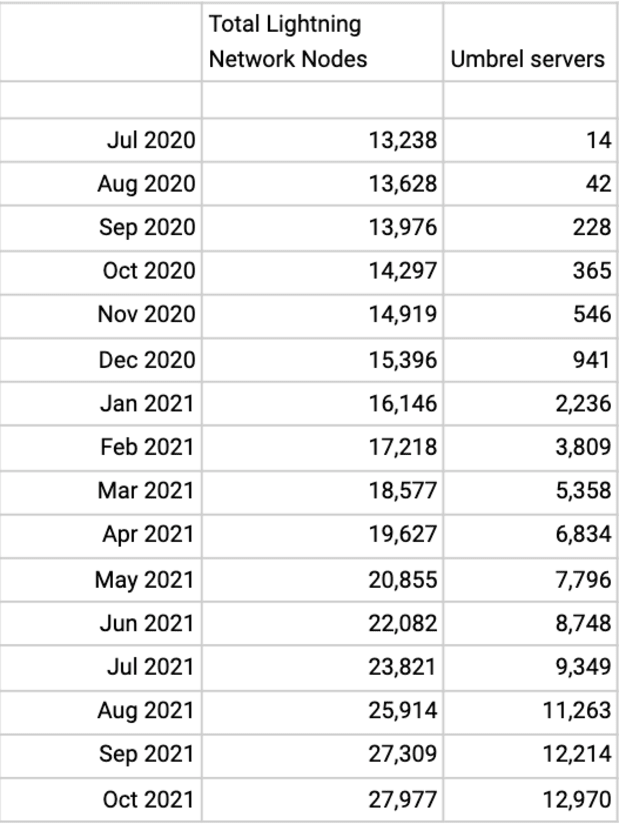 Today Umbrel presented new research that showed 90% of the lightning nodes brought online in the last year run on the company’s software.

Today Umbrel presented new research that showed 90% of the lightning nodes brought online in the last year run on the company’s software, which allows users to run a Bitcoin Lightning node and other software from their own personal server.

Just days before a new Umbrel and Bitcoin Machines hardware collaboration is shipped out, which allow users to plug-and-play personal Bitcoin nodes and Lightning nodes, Umbrel announced that nearly half of the Lightning nodes on the network were brought online in the last year, and that the vast majority of them were running the startup’s namesake software.

At the time of writing there are about 27,977 total Lightning Network nodes, 12,970 of which are running on Umbrel servers.

Between March and June of 2021 there were actually more Umbrel servers launched than there were total Lightning nodes. This is due to a migration of users who were already running a Lightning Network node, from another operating system to Umbrel.

How was Umbrel able to estimate the number of private servers? The company offers an anonymous end-to-end encrypted Lightning channel backup service, which allows users to recover their funds even if they had never manually backed up their Lightning channels.

How does this work? Umbrel’s anonymous automatic encrypted backups are client-side encrypted before being uploaded over Tor. They are then padded with random data, meaning the company cannot learn the contents or the size of the user backups. The backups are made immediately when a channel is open or closed. Umbrel also makes decoy backups randomly to prevent timing-analysis attacks.

Random interval decoy backups ensure the server can’t correlate backup activity with channel state changes on the lightning network and match up a backup ID with a channel pubkey.

The random padding obscures if the backup size has increased, decreased, or remains unchanged due to it being a decoy.

The combined features ensure that the backup server can’t learn any sensitive information about the user’s Umbrel. The IP address of the user is hidden through Tor. Users’ channel data are client-side encrypted with a key known only to the Umbrel device.

Due to the key/ID being deterministically derived from the Umbrel seed, all that’s needed to fully recover an Umbrel is a mnemonic seed phrase. Upon recovery the device can automatically regenerate the same backup ID/encryption key, and request the latest backup from the backup server, decrypt it, and restore the user’s settings and Lightning Network channel data.

As a result of this process, the data points Umbrel learns are just the number of unique backup IDs that exist on their backup server at any time.

Umbrel’s rapidly expanding node project helps keep the Bitcoin network out of capture by AWS and all centralized entities, allowing it to remain the most open, fair, and decentralized hard money the world has known.

The company stated, “In other words, plebs truly run this show.”